The park is best known for its wildlife and is featured in many National Geography shows. The vast plains, abundant wildlife, golden sunrise and sunset, and the interaction between predators and prey make the heart go wild.

The unique ecosystem is one of the oldest ecosystems on Earth. It’s the great migration that makes Serengeti most famous among visitors. Over millions of wildebeests, zebras and other antelopes start rushing from Serengeti in search of fresh grazing land and rain.

The same pattern of life, fight, death, and again life follows year by year. The interaction of predators and prey is the main attraction of the park. The lions and other predators hunting between the herds and killing them are heart-warming. Similarly during river crossing, some of the herds become the prey of the crocodiles.

Serengeti National Park is best to see great herds of buffalo, smaller groups of elephant and giraffe, and many other ungulates (hooved animals) such as eland, topi, kongoni, impala and Grant's gazelle.

Big predators can be seen easily. Lions, cheetahs and leopards are everywhere found on a kill.

Over 500 different species of birds have been recorded in Serengeti National Park. the most-gorgeous and endemic birds are the grey-breasted spurfowl, Fischer’s lovebird, and rufous-tailed weaver. 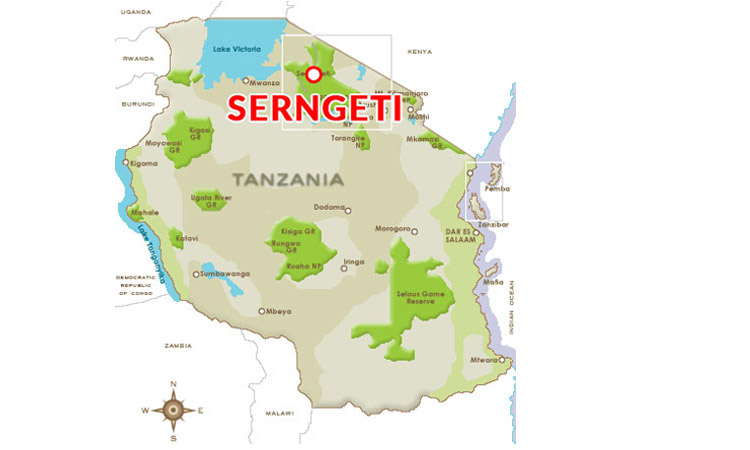 Serengeti National Park is good to visit throughout the year.

The dry season (from June to October) offers the best wildlife viewing when the vegetation becomes thinner. As the main highlight of the park is wildebeest migration, so June to July is good to watch them in herds. Calving can be seen from January to February.

The wet season (November to May) is good to see the migratory birds and bird watching is best during this period. 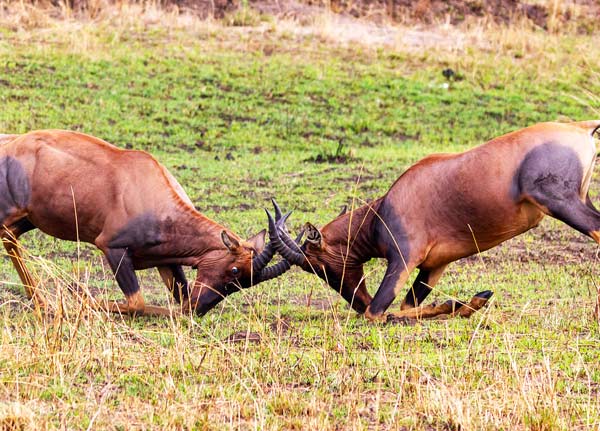 Serengeti National Park offers an array of activities to enjoy. Listed below are some of the most-experienced activities

The accommodations of Serengeti are placed in some thrilling areas of the park so that the visitors can get the authentic wilderness experience.

The tented canvas rooms are built above the ground on wooden platforms, and offer visitors an incredible level of comfort and homely feeling in the wildland.

Serengeti National Park is located in the far north of Tanzania, with the western part touching the banks of the Lake Victoria and its most northern part touches the border with the neighbouring Kenya.

The park is one of the most ecologically diverse national parks in Tanzania, and the vast plains cover 15,000 square kilometres, and in the bucket list of millions of travellers. 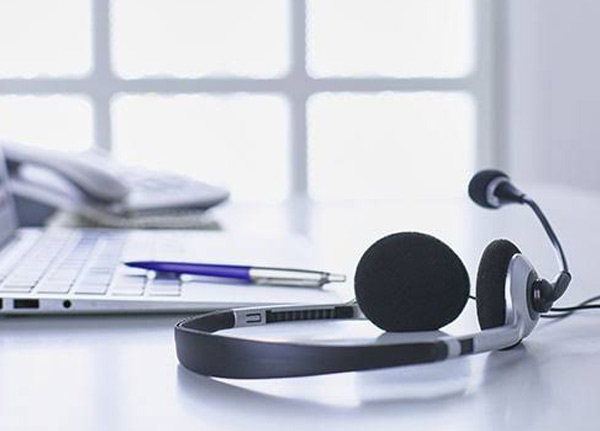 Talk To Our Expert

The magic of Tanzania is hard to beat as it holds the fabulous number of holiday options it presents. With choices ranging from incredible wildlife safaris among African wildlife, the serene surrounds of the gorgeous lakes, relaxing beaches, the highest mountain in Africa, Kilimanjaro and a simple visit through the eclectic Stone Town, Zanzibar there are some of the many activities one of the most stunning regions of East Africa has to offer.

Tanzania also proudly boasts a wide range of enthralling cultures. It is blessed with over 120 ethnic tribes and indigenous traditionalists. Despite such a diversity Tanzanian‘s are peacefully bond together with the wild environment. It’s a democratic multi-party state and has multiple religions, all harmonizing without any ethnic or religious tensions of recent.

Tanzania is best known for the safari paradise in the world. The northern circuit holds the height number of wildlife and offers a more intimate safari experience to visitors.

The Serengeti National Park alone holds the highest density of wildlife. Peak season (July to October) offers the best view of the wildlife when the vegetation becomes thinner and animals concentrate around the water sources to quench their thirst.

August to September is best to see wildebeest crossing the river in Northern Serengeti.

For birding enthusiasts November to May, the Wet Season is good. Migratory birds often come to visit the parks and make the view excellent. This is also the best time to see the calving in the southern Serengeti. The most incredible view is viewing wildlife in action. March and April are the peak of the wet season and normally not recommended for visitors as the road becomes a little bit slippery.

Nature is green and beautiful in the wet season and the parks experience fewer crowds.

Before visiting an unknown country, it’s important to research about the region properly. We have prepared a list of top travel tips to follow. Have a look.

With a wide range of things to explore you have to move frequently from one place to another. So it’s advisable to pack light to make the trip hassle-free.

Pack The Right Equipment For Photography

To capture the authentic essence of wildlife your photography equipments should be best. Don’t forget to pack extra batteries.

If you are visiting Tanzania, then Kilimanjaro trekking should be in your bucket list. The trail is not steep or the climb is not technical, so anybody with good physical fitness can summit the peak.

Don’t Miss Out The Beaches

The beaches of Zanzibar are the best place to spend relaxing holidays. The top beaches are quite accessible from Dar es Saalam.

Though tipping is not compulsory, its a tradition to show respect to the culture of the locals.

Normally maximum trips to national parks start from Arusha. So if you land in Julius Nyerere International Airport then you can fly to Arusha and start your trip.

In most cases, your tour operator receives you from the airport and takes care of your whole trip.

Chartered flights are also available to take you to the park.

Some of the most popular domestic Airlines and Flights in Tanzania are as follows:

The Rainy season: mid-March to May ("long rains") and November to December ("short rains").

Though Tanzania is blessed with a wealth of wildlife and breathtaking landscape, the people and culture have a unique position. Over 120 tribes and 120 different cultures make a wonderful mix of influences and beliefs.

Among all tribes, the Maasai Tribe is the most remarkable for their typical red and blue dress up, jumping dance, colorful beads and warrior nature.

From the tall graceful Maasai warriors, the ancient ways of the Hadza Bushmen, the inventive talents of the Makonde, the creative agricultural practices of the Wameru, to the Chaga farmers and traders.

Each of the 120 different tribes in Tanzania has their own distinctive ways of life but together, they gracefully unite to outline Tanzania a worldwide attraction. Here the travelers will get the opportunities to know the lifestyle of the tribe.

The Tanzanian shilling is the official currency of Tanzania but the US dollar is accepted everywhere. Other currencies such as euro, dinar, pound sterling, Swiss franc are not accepted for payments but they always can be exchanged for shillings at a reduced rate at any exchange office.

Most of the hotels, restaurants, souvenir shops and most of the large establishments accept USD but you can also pay by local shillings.

The easiest way to access money while travelling in Tanzania is at ATMs using a Visa card.

Except the exempted countries, all visitors to Tanzania must obtain a visa from one of the Tanzanian diplomatic missions.

Visitors need to complete the e-visa application form and make the payment with a credit card or bank transfer at www.immigration.go.tz. After your visa gets the approval, you will receive a notice through email.

Your passport should have a valid date for a minimum of six months beyond visa issuance and/or date of entry, and at least one blank visa page, is required. Visitors who enter on visas must show a roundtrip ticket and prove they have sufficient funds for their stay.

A safari is the real experience of a lifetime. And when it comes to Africa, it’s a world of opportunities to search out the wild animals, especially the Big Five.

There are several world-class wildlife destinations scattered in whole Africa holding the perfect safari for every kind of travellers.

Africa is made up of strikingly different and diverse countries, cultures and environments, with each region offering a stunning array of scenery, landscape, culture and, of course, the wild animals!

If you’re planning a delightful and highly worthwhile safari trip to Africa, then there are many choices for you.

From regions rich in diversity, or places fun for the whole family, or parks and reserves, the classic safaris guarantee to present you a good time.

The checklist of biggest airlines flying to Tanzania:

Due to the location, Tanzania has the risk of diseases transmitted through Mosquitoes like malaria and Dengue.

Regardless of your destination, the World Health Organization has recommended some vaccines that all travellers should cover.

Except these, follow a medical checklist of items include

For any avid traveller, Tanzania offers an array of great experiences to explore. Listed below are the uniqueness that Tanzania has to offer

Wilder Heritage believes in more intimate Tanzania safari lodge styles. So we recommend safari lodges that are warm, friendly and away from crowded areas.

Many of the camps we recommend will have canvas tents as this leads to an interpersonal and appealing safari experience. Safari lodges in Tanzania differ greatly from a three to five star level, with the smaller and more stylish properties.

Staffing at most Tanzanian camps and lodges are run by local Tanzanians – warm and cordial.

Tanzanian cuisine is affected by a few different cultures, for example, Indian, Bantu, and Arabic. The utilization of fascinating flavors, new coconuts, and crisp vegetables will take your taste buds on its very own safari!.

GREAT TANZANIAN MEALS INCLUDE: Ugali: Maize flour is blended with water to deliver a thick, nearly polenta kind of dish. It is eaten without anyone else or presented with curry, sauce, fish, meat or spinach. In spite of the fact that it probably won't be scrumptious for guests, it is unquestionably worth an attempt.

ChipsiMayai: A somewhat intriguing dish made of an omelet loaded up with chips, seared in a skillet. Despite the fact that it may seem like an odd blend, it is entirely delicious and extremely prominent at cheap food stands, that are found wherever in the nation.

NyamaChoma: Goat, pork, chicken or hamburger meat made on the grill, presented with Ugali and heaps of pili (a hot sauce comprising of tomato base and bean stew) – a dish adored by local people!Bananas: Something so basic however yet a neighborhood top choice. There are in excess of 17 different sorts of bananas and a few different ways of serving them. Bananas are additionally the staple nourishment of the "Chagga" – a nearby clan in the Kilimanjaro region and they assume a significant job in the day to day diet. Prevalent dishes incorporate, Mtori (pounded banana soup with meat), simmered bananas, NdiziNyama (bananas with meat stew) and flame broiled bananas.

Tanzania is best known for the safari paradise in the world.

Tanzania's unit of currency is the Tanzanian Shilling but credit cards

Blessed with a wealth of wildlife and breath-taking landscape, Tanzania

The currency of Tanzania is a shilling, which is written as TZS. The 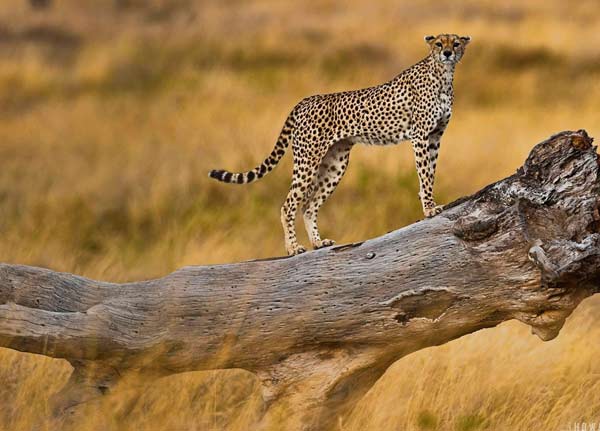 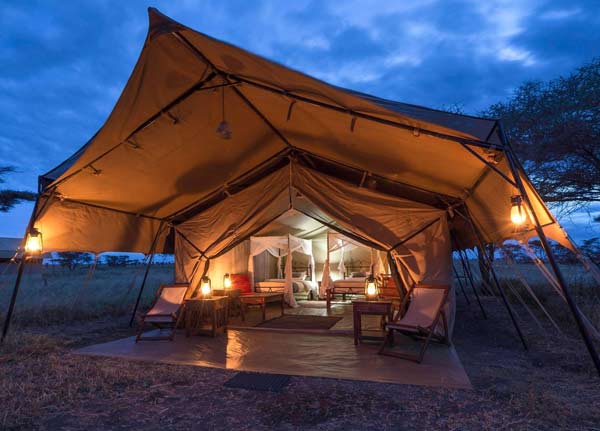 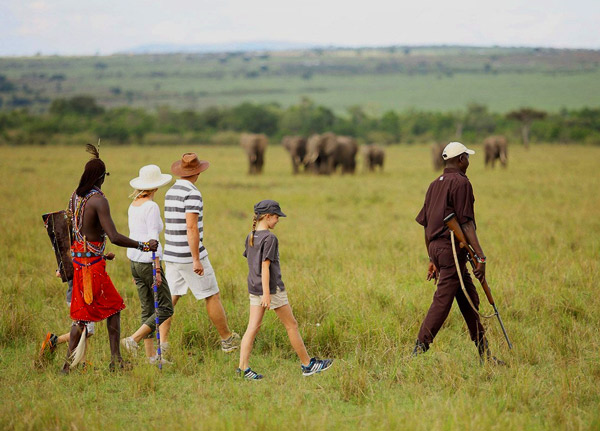 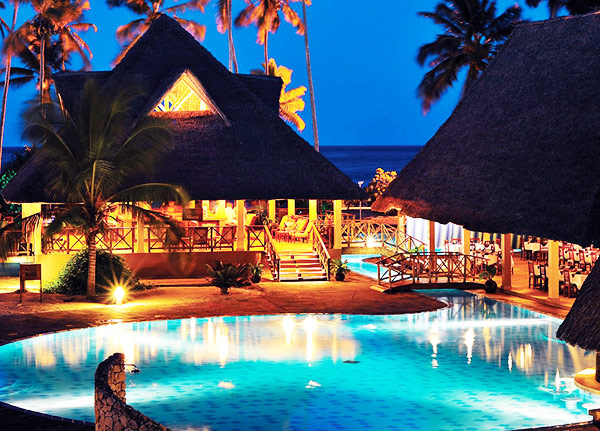 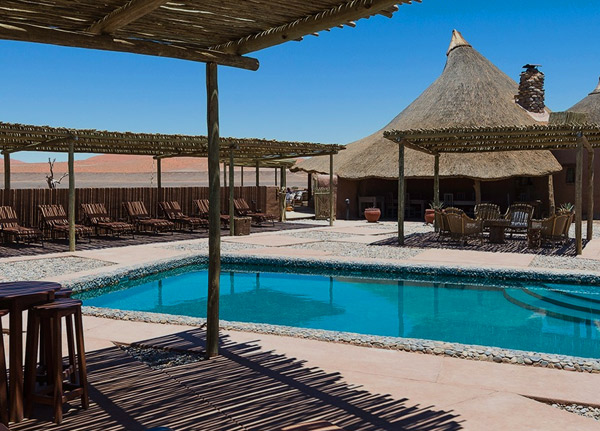 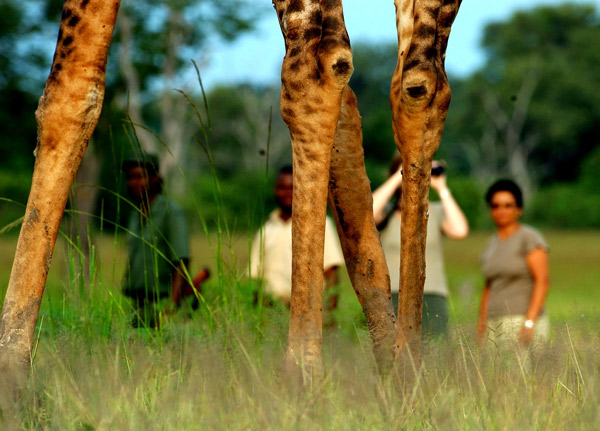 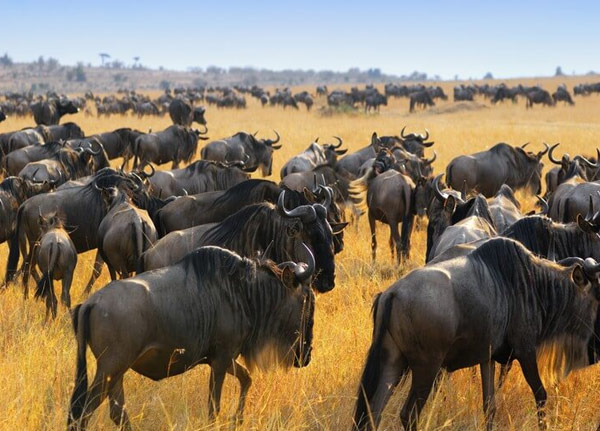 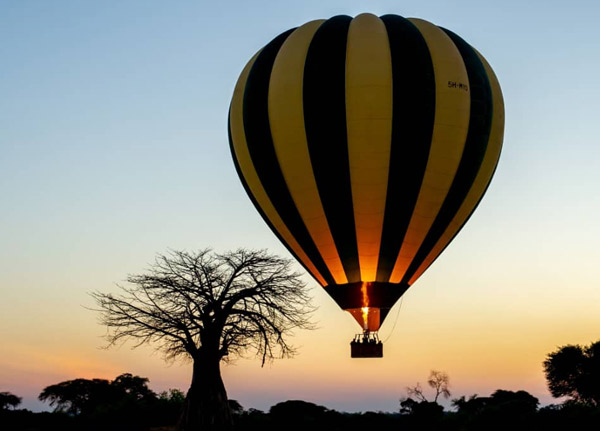 Give Us Opportunity To Serve You

Share your dream safari or trekking tour with us today and we will send you a tailor-made proposition today!